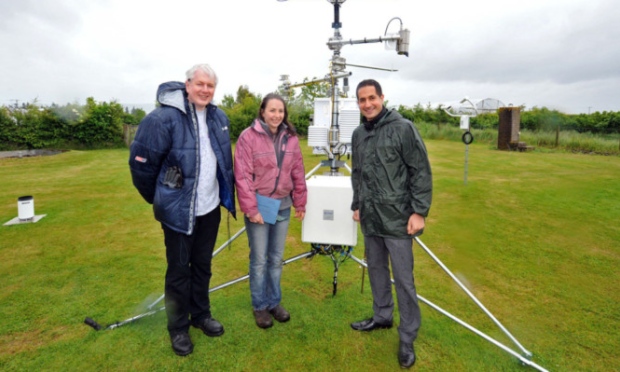 They were installed well before weather apps and websites kept us all informed.

But the oldest pieces of weather equipment at Tayside’s James Hutton Institute — sunshine recorders, thermometers and rain gauges — all work as accurately as the day they were brought into use.

And they stand as a lasting testament to the work of the Invergowrie institute, which celebrates its 60th anniversary this year.

Dr Roy Neilson, the weather station manager, told the significance of such a milestone.

He said: “It’s one of the oldest agricultural weather stations in the UK and until recently not a lot has changed in the way we collect the data.

“In 60 years I think we are missing only 12 days’ worth of recording, which is an example of the dedication of the people who have been keeping records here.”

Every morning a member of Roy’s team has to go round, kneel down on the dewy grass, and note down the amount of water, wind, heat and sunshine that’s hit Tayside during the previous day.

But change has started to creep in, with an automatic weather station being officially opened in 2012.

Roy said: “Someone comes out here at 9am, 365 days a year, and takes recordings.

“But the automatic weather station can do it whenever we programme it to do so.”

The new solar powered contraption can perform the same tasks as all the 1950s equipment combined, but the researchers aren’t yet ready to trust in the new technology completely.

Instead, they loyally use their reliable old pieces, like the Campbell-Stokes sunshine recorder.

This extraordinary machine, invented more than 150 years ago, magnifies the sun’s rays through a glass ball so they burn through a piece of paper, with the scorch marks used to measure the hours of sunshine in a day.

Roy said: “It makes a mark on the card and what we do is read it and send the data to the Met Office.”

Using information collected by Roy and his team, the researchers at the Met Office in London can calculate general patterns and make predictions about the weather in Dundee, Tayside and across the east coast of Scotland.

And while the current methods of data collection may seem old-fashioned, it is more complicated than it used to be.

Referring to a rain gauge, Roy said: “The old way of doing this was by letting a bottle fill with rain and measuring the water.

“But we don’t do that anymore. It’s a lot more sophisticated now.”

The more advanced rain gauges on the site use a mechanised bucket system, which is able to measure the amount of rainfall across time.

And one contemporary machine even uses lasers, fired in the space between its three funnels, to measure the direction, intensity and form of the rain, drizzle, snow and hail falling.

Despite these advances, Roy is humble about the role the weather station has played in its six decades. He said: “It’s just part of scientific research.”