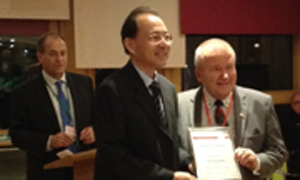 An Angus businessman has spoken of his pride in being honoured by a Sino-British trade relations body.

At a Holyrood reception, David Valentine from Forfar was recognised with a fellowship to the 48 Group Club (the Icebreakers), an organisation which can trace its work to foster positive business and cultural links with China back six decades.

The motto of the 48 Group Club is Equality and Mutual Benefit, echoing the words of former Chinese premier Zhou Enlai who first used that phrase in 1953.

The Young Icebreakers is the latest development within the organisation to expand the network of connections and continue the role of helping to reduce the cultural deficit between China and the rest of the world.

As a former economic development chief with Angus Council, Mr Valentine pioneered the authority’s programme to forge links with China over 15 years and since his retiral from the authority â¨continues to build new ties to the east through his Valentine International Business Connections consultancy.

Golf is a particular passion of the Angus businessman and he also owns the famed Simpsons golf shop in Carnoustie, â¨established in 1883 and known to players across the globe through its distinctive multi-coloured umbrella roof and prime position near the town’s championship course.

The Icebreakers Club now has more than 600 British and Chinese members, including senior executives from corporate organisations involved in trade and other dealings with China, as well as high-level politicians, â¨diplomats, academics and others focusing on cultural relations.

Mr Valentine said: “I was absolutely over the moon when I learned I was to receive this award.

“It is a great privilege to be even thought of for this fellowship from a UK group and I think it is a recognition of not only the work I did during my time with Angus Council, but also the other opportunities I have been developing over the last two years.

“I believe Angus Council should be applauded for taking that leap of faith 16 or so years ago against what was then quite a bit of criticism from people who didn’t understand that China was emerging as one of the strongest economies in the world.

“There have been considerable successes since then and benefit for Angus companies which might have found it difficult to continue trading successfully were it not for the new business they established there.”

Mr Valentine continued: “I am still working behind the scenes to bring Angus companies into play in China and I will continue to do that, but in the meantime my connections are keeping me very busy.”

He is recently returned from an 11-day mission focused on the golf market in areas including Beijing and Shanghai.

“There are thousands of golfers coming from China to play here on famous courses such as St Andrews and many are high net value individuals so it is a market worth considering for the future and there are many opportunities continuing to emerge for businesses in Scotland,” he added.