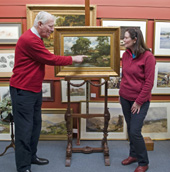 We are pleased to announce that we are holding our popular Valuation Days throughout the year in aid of FUNDING NEURO, a charity established to raise funds for research into Parkinson’s disease, Alzheimer’s and Brain Tumours.   This is a small charity which is working hard to raise funds for this specialist research.

Our first Valuation Day on Thursday, 19th February 2015 will feature ANTIQUE PAINTINGS & PRINTS and our expert is Malcolm Innes was, for over thirty years, one of the leading British dealers in Scottish, Sporting and Military pictures - oil paintings, watercolours and pastels.  Starting in Chelsea, London in 1973, he opened a Gallery in George Street, Perth for four years 1980-1984.   This was moved to Edinburgh beginning in another George Street and changing to Dundas Street in 1995.   Meanwhile, the London Gallery transferred to the ‘Heart of the Art World’ in Bury Street, St. James’s.

As Malcolm’s retirement approached, the Edinburgh Gallery became the Anthony Wood Gallery and for a further three years the Malcolm Innes Gallery in London merged with, and is now part of, The Tryon Gallery.    Malcolm Innes lists museums, corporate and private collections among his clientele.   He has had stands at nearly 40 Game Fairs including those at Scone and Moy.

He now lives at Kilspindie, Near Abernyte, and is happy to help owners of pictures on restoration, framing and valuations as well as advising on buying and selling at Auction.

He will be available from 10.30 am to 3pm to give verbal valuations of your paintings.   A donation of £2 per item will be requested when you arrive at the main desk and register.