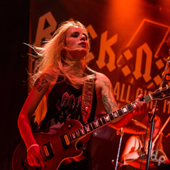 This year, the Summer in Angus programme of events and activities will ensure there’s no shortage of things to do or places to go across the county.

May kicks off with Kirriemuir’s annual celebration of one of the town’s most famous sons – Bon Scott, lead singer with rock band ACDC. Bon Fest will take place in Kirriemuir on the weekend of 1/2 May and is expected to attract over 700 ACDC fans from all over the world. “Last year, fans travelled from France, Spain, Norway, Italy, Austria, Switzerland, Germany, Russia, Poland, Canada, USA, New Zealand and Australia to attend Bon Fest,” said Graham Galloway of DD8 Music, organisers of the festival.

“Headliners this year are the amazing Rocker, from Orkney, and AC/DC UK, who are one of the top tribute acts in the country. We’ll also be recreating ACDC’s famous ‘Long Way to the Top’ video, with Rocker playing on the back of a classic vintage lorry as it drives through the town, and holding a market in the Square.

“There’s always a fantastic atmosphere in Kirriemuir during Bon Fest, with so many different nationalities having a great time and sharing their love of rock music, ACDC and Bon Scott.”

Music of a different genre will be celebrated at Arbroath’s Webster Memorial Hall on May 2, when The Hollywood Bees will perform the music of The Hollies and Crosby, Stills and Nash, while mod fans can look out their parkas and head to Montrose Town Hall for From The Jam, featuring former Jam bassist Bruce Foxton. Or, for those who prefer more traditional tunes, Angus Accordion and Fiddle May Day Ceilidh will be held on the afternoon of 3 May in Forfar’s Reid Hall.

Arts and crafts also feature in May’s Summer In Angus programme. Angus Craft Association is holding a fair in the Reid Hall, Forfar, on 9/10 May, while Angus Open Studios, which is from 14-18 May, provides opportunities to visit local artists’ studios and watch them at work.

Museums, visitor attractions and heritage centres in Angus have a busy time during May. On May 15-17, Montrose Air Station Open Weekend will commemorate the 70th anniversary of the end of World War II with a special open weekend. As well as free admission and lots of activities, there will be an exhibition about the Soviet pilots who undertook a top secret mission to Scotland in 1943. Kirriemuir’s Gateway to the Glens Museum celebrates its 14th birthday from 16-23 May and Glenesk Retreat has an ‘unforgettable’ evening of entertainment on 15 May – Hearth and Home.

“As well as music, songs and stories, the children of Tarfside and Lethnot primary schools are presenting When Fairies Glide, an enchanting short play written in 1957 by Helen Cruickshank, a significant figure in Scottish 20th century literature and a frequent visitor to Glenesk,” explained Maria MacDonell, Volunteer Curator, Glenesk Folk Museum.

“The children are bringing this play to life after a very long time and it\'s a chance to see it for the first and perhaps also the last time for many decades.”

Other May highlights in the Summer in Angus programme include a show at Webster Memorial Theatre on May 20 starring Strictly’s Pasha Kovalev, The Abbey Theatre’s production of Neville’s Island from 22-30 May and Pageant In The City on 30 May, when Brechin will host a parade through the streets, with a competition for the best-dressed float.

For the full programme of Summer In Angus events happening during May, visit the ‘What’s On’ page at www.visitangus.com or like ‘Visit Angus’ on Facebook.

Caption: One of the bands at last year’s Bon Fest.