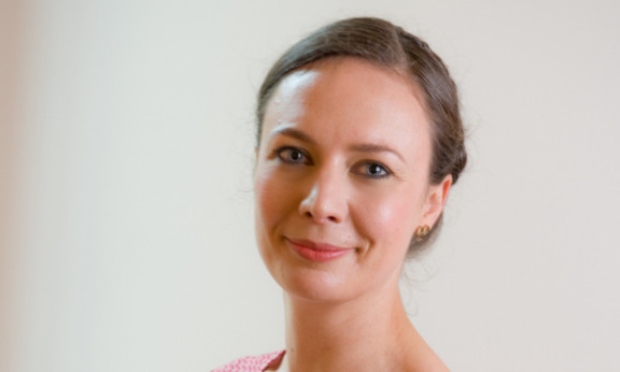 Growing up in rural Wales with the massive Hay–on-Wye literature festival held annually a few miles away in one direction and the famous Brecon Jazz Festival a few miles in the other, Beth Bate was always aware of “big cultural forces” in her native land.

But much as she enjoyed village life, it was this feeling that “life was happening somewhere else” that made her realise as a teenager that she had to get away.

Now, having just taken over as director of Dundee Contemporary Arts (DCA), Beth, now a 38-year-old mother-of-two, says she has her “amazing” parents to thank for inspiring her – and she is delighted to be working – and living - in a city that is putting culture at the heart of its regeneration.

“Two very important things happened as a teenager getting my brain going in art and culture,“ Beth told The Courier in her first interview since taking over as DCA director in January.

“Firstly I joined a youth theatre when I was 14, connected to the award winning theatre group Theatre in Paris which sadly no longer exists. The thing that was so important was that anyone could go. But the quality and the hard work that the people running it demanded was completely inspiring.

“The other thing that happened when I was 14 was that my dad took me to London to see a big Pop Art exhibition at the Royal Academy. I remember it so vividly. I had never seen art like that. I didn’t know that’s what art could be like. It was incredible. There were Peter Blake’s, Andy Warhol’s...Even though these sculptures and images were created by predominantly guys who were easily 50 years older than me, it was shocking, fun, raw and it made me think in a way I’d never been asked to think before.”

Attracted by the bright lights – and night life – of Birmingham, Beth studied English with history of art at the city’s university. She specialised in the Pre-Raphaelites and was particularly interested in the massive political and social change that happened in Victorian Britain and how artists were influenced by it.

Balancing freelance festival work with study for her Masters in Museum Studies, her big break came in 2004 when she was appointed director of Great North Run Culture, developing the Newcastle-based organisation over 11 years to become one of North East England’s major commissioners of contemporary art.

Putting culture at the heart of economic regeneration in the former industrial heartlands of the North East was central to what she did.

And it’s the “buzz” she experienced in Newcastle that she can now sense in Dundee, working closely with other arts groups, as the city develops its £1 billion waterfront alongside other ambitious projects such as the Dundee Design Festival.

“I had been to Dundee before,“ she smiled. “I had done some research for what used to be the Scottish Arts Council about eight years ago and met with a couple of artists.

“I obviously knew of DCA because it had a thoroughly deserved phenomenal reputation within the art world and beyond. So it was interesting when it came back on my radar. I did the Clore Leadership programme in 2014/15 and my good friend Claire Dow who is a theatre producer in Dundee was talking about life in the city, about the Rep and the V&A.

“I saw the post advertised and thought I would do a secret reccy.

“I thought ‘I’ll sneak in. come to Dundee unannounced and look at the city. Is this somewhere I’d want to move my family?’

“But it was a disaster! “she laughed. “Not because the DCA was a disaster. But the secret shopper element was because I only know three people in Dundee and I saw all of them – pretty much within minutes of getting off the train! It was a really good sign in a funny kind of way!”

During that ‘secret’ visit Beth spent a lot of time ‘undercover’ in the DCA and also tried to get a feel for the city.

“Was it a place I could imagine myself working in?“ she said. “It was difficult because I have a husband and a young family. I had to decide whether this was somewhere I wanted to bring my family. It was important I got a sense of Dundee because I knew if I took the job I’d want to live in Dundee. If I’m going to stand here and make the case for Dundee it’s important I live here! I’ve never lost that urge to be in a place where interesting things happen and where interesting people are.

“I also do get nervous if I’m too far from a Top Shop!“ she added with a laugh.

Beth is in charge of 78 staff at DCA and she has been taking time to meet the “amazing” team. Reflecting on her own teenage experiences, she believes that art and culture can change peoples’ lives for the better. And the unique selling point of DCA, she says, is that it’s not just a place where artwork is shown. It’s a place where it is created too, serving visitors and the local population alike.

She added: “I think DCA has to absolutely retain its position as a cornerstone of cultural life in Dundee.

“We need to be clear who we are. We are Dundee Contemporary Arts. And very word is there for a good reason. The 2018 opening of V&A is a really good opportunity for us. In the short term, we’ll have some good exhibitions planned for 2018. I’m tight lipped on what they might be but we’re talking to some really good Scottish and international artists.

“There will be a big focus on visitors and new visitors to Dundee. But it’s also an opportunity to focus on our communities. How and how well we focus them. Who’s here? Who isn’t here? We need to make sure we are geared up for national and international tourism, but are still serving those who live and work here all year round. Of which I’ll be one!”

Article from the courier