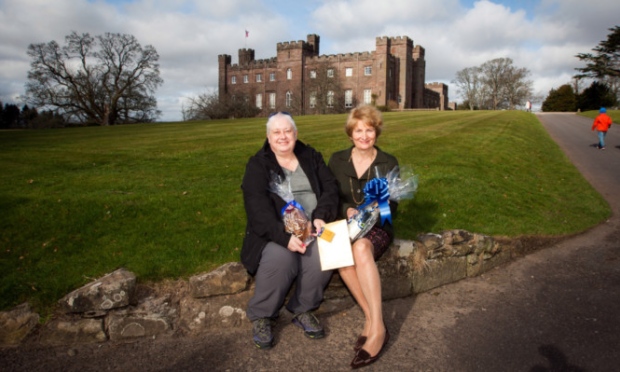 The five-star Perthshire property opened its doors to the public for the first time in 1966.

The iconic attraction marked the start of its golden anniversary season with a Champagne reception.

Lady Mansfield greeted the first visitors with a prize season ticket and a bottle of bubbly.

There was a queue of cars waiting outside the grounds for the 10am opening. First in was winner Rosie Henderson of Perth.

In its anniversary year, the palace is also offering visitors the chance to upgrade their palace and grounds entrance tickets to season tickets at no extra charge, meaning visitors can enjoy unlimited entry until the end of the season on October 31.

In preparation for yesterday’s opening, the palace’s renowned long gallery has been spring cleaned, the state rooms have been aired and dusted and the coffee shop repainted.

Marketing manager Margo Baird said: “As one of Scotland’s most beautiful and historic landmarks, we are delighted to celebrate 50 years as a visitor attraction with the public.

“Scone Palace has welcomed millions of visitors from all over the world in the last 50 years and we plan to continue welcoming millions of people through our gates for many years to come.”

The weekend was full of surprises with pirate-themed fun and games.

Visitors were able to take part in traditional pirate training, with children getting the chance to hear swash- buckling stories set in exotic lands and were then invited to join a special quest to find the palace’s hidden treasure.

The palace was built on the site of a 12th Century abbey. It was extensively upgraded in the early 1800s with its now familiar Georgian Gothic style.

Scone is the crowing place of Scottish kings and welcomed, among others, Robert the Bruce and Charles II.

One of Scotland\'s most recognisable tourist attractions, Scone Palace is the original home of the Stone of Destiny and site of the coronations of the Kings of Scots.