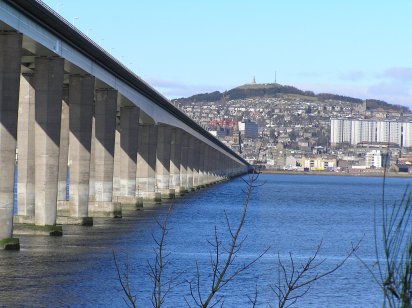 Painting the Forth Bridge is well known as a thankless task.

But here in Tayside, volunteers are only too excited to be playing a part in transforming part of the Tay Road Bridge thanks to a £20,000 project.

Two urban street artists and a technical assistant have been brought in by the bridge’s Joint Board to create a colourful and imaginative display to “liven up” the concrete of the Dundee-side ramp.

The work has been planned to coincide with the 50th anniversary celebrations in August as well as part of the Waterfront development.

Martin McGuinness and Fraser Gray were asked to prepare some designs for the columns, to show what they would do with the largely forgotten space. They have been working alongside technical assistant John O’Meara.

Part-time postman Martin, from Newtyle, said: “Art is where my passion lies and it’s great to be involved.

“There’s a whole lot of energy in the city at the moment and to be a part of that is amazing.

“A lot has and is changing in the city with the redevelopment and hopefully this finishing will signify Dundee nearing completion.”

Fraser, from Birkhill, said that he is also pleased to be involved.

He added: “It’s going to be a design for people to walk around and discover.We want it to work with the City of Discovery.

“We have a clear and concise plan of what we’re creating, but it may need adapting for the specific environment, as things develop.”

Alan Hutchison, bridge manager, said that they had started the project at night — with projectors to cast the outline on to the space — to allow them to trace it on to the concrete.

He said: “They’ve just started painting after all the work they have already done with the projector.

“Concrete is so boring and this will liven it up. It’s a very bare area and the colour and designs will complement the Waterfront project.

“We’ve given them free rein with it, letting them do what they think is best. It’s going to look amazing and really add to an area that’s quite austere. We can’t wait for the big reveal.”

The project has been funded and organised by the Tay Road Bridge Joint Board, with the help of four sponsors: Fairhurst Consulting Engineers, VMS Ltd, Charles Scott and Partners, as well as local business Nova Alarms.