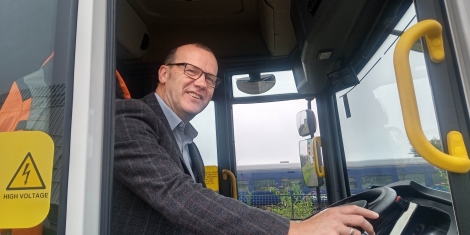 A successful double trial of the city’s electric commercial vehicle charger provision and a new electric bin lorry have taken place in Dundee in a move thought to be the first of its kind in Scotland.

The Dennis Eagle is the second of its type to hit the city streets in preparation for two similar vehicles going into service after approval was given to buy them late last year.

Mark Flynn convener of the city development committee said: “These two bin lorries are due to be added to our fleet working refuse routes in the city and are a very obvious physical demonstration of the council’s continued commitment to clean air.

“Not only are they good for the environment they will also save money. Not just in fuel costs but also when compared with their fossil fuel counterparts they’re cheaper on servicing and regular maintenance, so this is a big win any way you look at it.”

Steven Rome, the committee’s deputy convener added: “In January we agreed that new electric commercial vehicle charger provision should be provided at Greenmarket and council depots at Marchbanks HGV and Logie Avenue as well as Dawson Park.

“Despite the challenges faced during three months of total lockdown our contractors Swarco have done a great job of getting the 150kw charging provision at Greenmarket installed and successfully tested.”

As part of the council’s drive to reduce the environmental impact of its fleet, discussions took place with Transport Scotland to support the transition of larger vehicles to zero emission options.

A significant investment from Transport Scotland in the commercial vehicle charging infrastructure is ensuring that Dundee remains at the forefront of the country’s EV use.

The bin lorry and charging infrastructure form part of a wide initiative which has made provision for other electric commercial vehicles including a pair of fully electric minibuses, a large mechanical sweeper and an intercity e-coach all of which are expected to go live later this year.