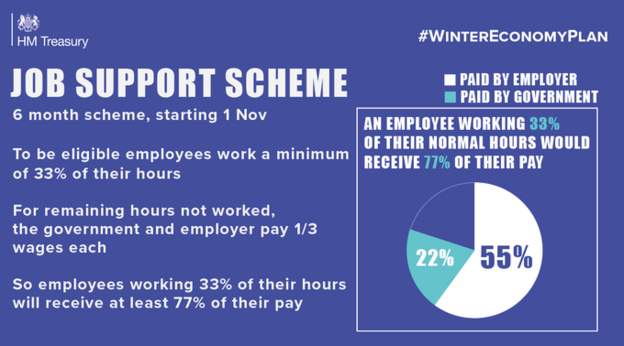 The government is to top up the wages of workers covering up to a third of their hours for the next six months, Chancellor Rishi Sunak has said.

The new Jobs Support Scheme will replace the existing furlough scheme when it ends on 31 October.

Mr Sunak set out his "winter economy plan" after the government introduced new measures to stop the spread of the coronavirus.

There are fears firms will make mass job cuts when the furlough scheme ends.

Nearly 3 million workers - or 12% of the UK's workforce - are on partial or full furlough leave, according to the Office for National Statistics.

The chancellor said that employees will have to work for at least a third of their normal hours to quality for the new scheme, which begins on 1 November.

Businesses that have borrowed money through the government's loan scheme will also be given more time to repay the money.

And a VAT cut for hospitality and tourism companies will also be extended until March. The cut from 20% to 5% VAT - which came into force on 15 July - had been due to expire on 12 January next year.

The chancellor says he is also extending the scheme for self-employment on "similar terms" to the existing job support scheme.