November at The McManus 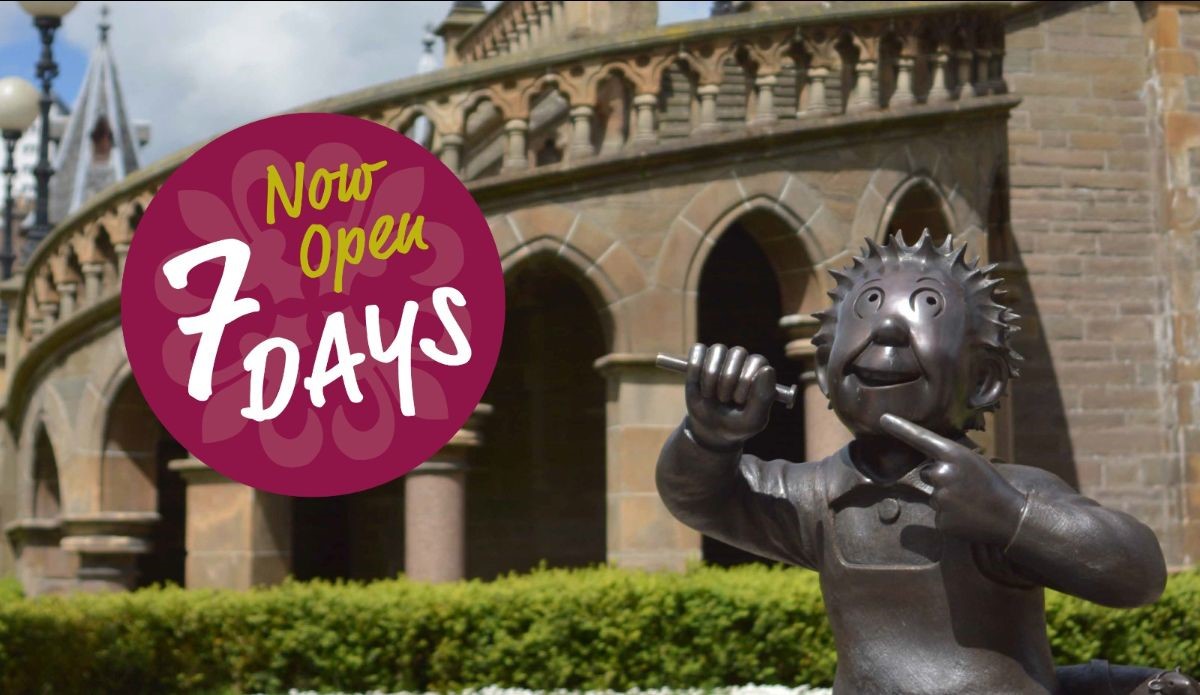 Welcome to November at The McManus

Although Dundee has now been placed in Level 3 of the Scottish Government’s new Covid-19 protection guidance, visitor attractions are allowed to remain open and The McManus: Dundee’s Art Gallery & Museum will be open 7 days.

We have a range of protective measures in place for your safety and can't wait to welcome you to Scotland's Best Visitor Attraction.

To plan your visit go to www.mcmanus.co.uk, where you will find a video on what actions we have put in place to protect you and other visitors.

As ever, admission is to The McManus and our exhibitions is free, but donations to support the work of The McManus in caring for the City's collections are welcome. To make a donation click here

The McManus is fortunate to hold a great collection of fine art photography. Central to this is the huge archive of some 900 individual photographs by Joseph McKenzie. Since Joe’s death in 2015, the importance of these photographs has been further underlined. Though he took tens of thousands of negatives during his lifetime, he wasn’t able to print more than a small fraction of them. So, for Dundee to have an archive that was not only taken by, but also printed by, Joe is an unparalleled resource for photographers and researchers. Our collection remains the largest public holding of Joe’s work.

This display had been planned for some time – a response to the ongoing development of the waterfront. Little did we know how powerfully the title and content would resonate with visitors as a result of the pandemic. There is no doubt that this has been a difficult 6 months. Happily, out of this difficult situation has come many positives. Early visitors stressed how safe they felt in The McManus with many subsequently describing their visit as a haven – an escape from the worries of lockdown and an opportunity to recharge. Our #McKenzieMondays on social media have supported those who are unable to come into The McManus to view images from the show and share their responses. It is clear that the resilience of the City and its people shine through and has been a balm for our troubled times.

The display has been extended until 24 October 2021

Time and Tide: The Transformation of the Tay

Dundee would not exist without the Tay nor have transformed from a small medieval settlement to Scotland’s fourth largest city. The Firth of Tay is well known for the quality of its landscapes and wildlife.

This temporary exhibition looks at the influence the Tay has had on the City of Dundee, and how the growth of the city, particularly along the waterfront has affected the Tay, its wildlife and the people who live here.

From early settlement to industrial giant to post-industrial leisure destination the waterfront continues to recycle and reinvent itself. This exciting new temporary exhibition explores how the Firth of Tay and the Dundee waterfront in particular has changed since the 18th century.

We follow the story of the waterfront and coastline with a combination of artworks, plans, rarely exhibited objects, films and sound. It will show the dramatic changes Dundee has undergone since it was a small coastal burgh to the vibrant city it is now. It starts with the formation of the Firth of Tay and the evidence from the rocks beneath our feet.

There are five themes exploring change.

The Early waterfront
We look at the rapid expansion of the harbour from the end of the 18th century and docks to the early 19th century using contemporary plans, charts and artworks.

Across, along and over
Looks at how the Tay has affected transport. It includes items from the ferries, railways and the effect of the road bridge on the waterfront. Objects include; a copy of the print of the design for the original Tay rail Bridge; a model of the “Kinnaird” an engine that ran on Dundee to Perth Railway; a ferry notice board, the ships wheel from the B.L. Nairn the last “Fifie” paddle steamer and objects from the Tay road bridge.

Continuing Development
This section follows the continuation of the 19th and 20th century developments of the docks when they reached their greatest extent. Concentrating on the Caledon shipyard, we are showing a small number of objects from our collection, including engineers tools, Wooden foundry patterns, ships identity plaques and a half hull plating model. A model of the dockyards made in 1945 to show the proposed World war II defences completes this section.

Visitors and residents
The Tay was home to some strange and rare fish such as the Sturgeon, Sparling and Lamprey. In Scotland the Sparling is now only found in the Tay, Forth and Cree. We know of the whales and dolphins that live in and around the Tay because of occasionally stranding. We look at the effects of an oil disaster and how the estuary was cleaned up from raw sewage pollution. Fish collected from the filters of the Carolina Port Power Station give a snapshot of the Tay in the 1970s

Recreation and leisure
This section brings the story up to date. The Victorian period saw the formation of the first swimming, sailing and rowing clubs. Traditional industries on the Tay such as salmon fishing were in decline and sport fishing took its place. Throughout the 20th century the decline of the harbours, particularly after the road bridge was completed saw major redevelopments of the waterfront.

We finish off with the most current developments of the Tay and how the same area of waterfront has been recycled to its present use. Finally we examine modern day concerns with plastic pollution.

The Mills Observatory Pop Up Shop has returned to The McManus Shop!

We have toys, books and gifts perfect for everyone - from experienced star gazers right through to junior astronauts!

Our high-end telescopes are also available, with experienced staff on hand to ensure you get the right model for you. #TheMcManusShop